History of the Memorial

One man can make a difference

I made plans to visit  in 2000 to show my young son and bride Pearl Harbor, and when we arrived it really disturbed me that the USS Oklahoma seemed to be forgotten. On the very place the USS Oklahoma was moored on the morning of Dec. 7,1941 was now the battleship USS Missouri.   After touring the Mighty MO, I later toured the Punch Bowl National Cemetery and couldn’t locate the remains of the 429 crew members  of the USS Oklahoma.   None of the grounds keepers at the Punch Bowl Cemetery knew where the crew of the OKIE was interred. I discovered after my trip that the crew was buried in mass graves with markers listing the amount of bodies in each grave and the word “UNKNOWN”.

Three ships didn’t make out of that harbor alive after the Japanese attack.

The Arizona, and the Utah are still located in Pearl Harbor today with their crew entombed. Only the USS Oklahoma was removed and scrapped.

I decided that some marker was needed to be placed at the  Missouri announcing the USS Oklahoma was moored here during the battle for Pearl Harbor.

I made an appointment with a local businessman, Mr P.B. Odom III and he instructed me to write a letter of intent and he would mail it out to the right government parties.   His daughter Rachel proofread my letter and dropped it into the mail.

I corresponded with the White House, Congress and the US Senate. I want some historical sign announcing the presence of this once proud battleship. I want the tourist at Pearl Harbor to know the truth of the USS Oklahoma.   At this point I knew I needed to drum up some local support.

I was invited to tell my story to a group of  local businessmen a local state senator had assembled, and from that a committee was formed.

I purchased the domain www.ussoklahoma.com and started traveling across the country attending numerous USS Oklahoma reunions getting to know the men who stood on the teak deck of the Oklahoma.  I began collecting interviews, and I purchased material and collected numerous photographs to tell the story of this great ship.

This website was massive at one time to enlighten the general public about the crew and the battleship.

I invited Mr Paul Goodyear a survivor off the USS Oklahoma to come join the committee because he spearheaded the OKIE survivors association. I had met Mr Goodyear at a USS Oklahoma reunion.

When you get a large group there will be friction.  Some folks don’t see eye to eye on how it should be done.  So to solve that problem  we invited a new member.  The very conscience of this committee in  keeping everyone in line was our  secretary and  executive member of the board, Elayne Dennis.  She was extremely vital in keeping the minutes of our meetings, and  each e-mail the co-chairs sent to the members.   To this day I still have them all.   From 2000 the Memorial Committee began to progress and on September 7, 2006  with just a few weeks before the  groundbreaking ceremony our two chairpersons thought it best to add another voting member to the board.   They invited Mr Edward Vezey  to join our group.   Mr Vezey was another USS Oklahoma survivor.   He was soon brought up to speed on the project.

When you have an ideal and you share your vision with others you will empower them to be part owners and miracles will begin to happen.  The Lord placed it in the hearts of a lot of people to help.

After 5 long years and over $20,000 of my personal funds the movement began to attract the attention  United State Senator James Inhofe, United States Congressman Tom Cole  of Oklahoma.

We needed their assistance because of all the red tape trying to build large memorial on an active military base.

Senator James Inhofe sponsored a Bill in the U.S. Senate, and in concert with Congressman Tom Cole who supported the  Bill in the U.S. House of Representatives and Congressman Cole later carried the Bill to the President’s office for signature by President George W. Bush.  The Memorial had to be built in a certain time frame.

I had $1,800 of personal funds,   I used  to  organized a free to the public WW2 USO style benefit concert that included legendary USO entertainer  Anita Bryant with choir and orchestra, 145th Army band, also a WW2 style swing band, “The Talk of the Town”.   The event was held at a local church Crossroads Cathedral.  The event concluded with a beautiful fireworks display.  I was able to raise over $50.000 for the memorial from the donations made at this free concert.

In conclusion the  fine people of the great state of Oklahoma, and The Oklahoma Centennial Commission under the direction of Mr Blake Wade raised the 1.1 million dollars for the building of the memorial.

The memorial was dedicated during the Centennial Celebration of the great State of Oklahoma on December 7, 2007.

The surviving crew made this their official website, however with their passing, and no financial support I was forced to condense this site too but a shadow of what it once was. 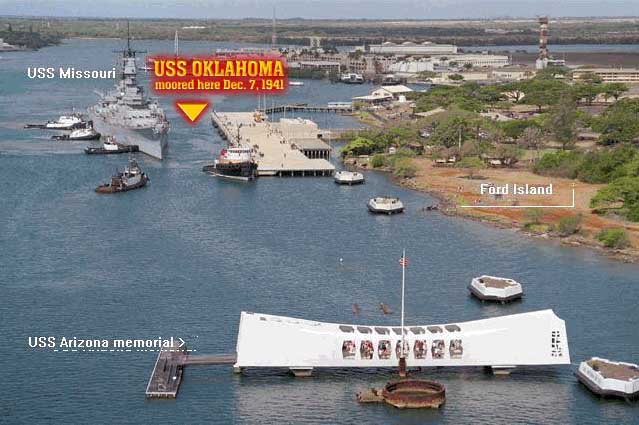 Keeping their memory alive
Scroll Up